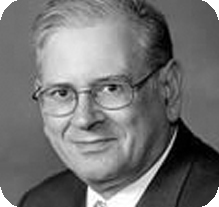 Marconi Award, 1994; US National Medal of Technology (1997); IEEE Alexander Graham Bell Medal (1997); National Academy of Engineering Charles Stark Draper Prize (2001); ACM Turing Award (2004); Inductee, National Inventors Hall of Fame (2006); US Presidential Medal of Freedom (2005); Fellow of the Computer History Museum (2006);Japan Prize (2008); Kahn has also been named a Fellow of the following organizations: Member, National Academy of Engineering; Kahn has also been honored with membership in the American Academy of Arts & Sciences; and the New York Academy of Sciences and has been named a Fellow of the  IEEE, ACM, AAAI and an Honorary Fellow of the University College London.

With Vinton Cerf, for pioneering work on internetworking, including the design and implementation of the Internet's basic communications protocols, TCP/IP, and for inspired leadership in networking.

Vinton G. Cerf and Robert E. Kahn led the design and implementation of the Transmission Control Protocol and Internet Protocol (TCP/IP) that are the basis for the current internet. They formulated fundamental design principles of networking, specified TCP/IP to meet these requirements, prototyped TCP/IP, and coordinated several early TCP/IP implementations. Since then, they have continued to provide leadership in the networking research community and in the emerging industries of the internet and telecommunications.

Robert Kahn was born 23 December 1938, in Brooklyn, New York. He earned his B.E.E. in electrical engineering at the City College of New York in 1960 and went on to earn his M.A. (1962) and Ph.D. (1964) in electrical engineering from Princeton. He took a job at AT&T Bell Labs in 1964 and then joined the electrical engineering department at MIT as an assistant professor in 1966. Wishing to do more applied research, in 1967 Kahn arranged a leave of absence from MIT in to work at the firm of Bolt, Beranek and Newman (now known as BBN), where he began developing his own ideas for computer networking.

In 1968, Lawrence Roberts of the US Department of Defense Advanced Research Projects Agency issued a request for proposals for an experimental large-scale network. The ARPANET project proposed using emerging techniques such as packet switching and distributed communications, along with an unheard-of diversity of computer hardware and operating systems. The ARPANET’s backbone was to consist of a set of long-distance telephone lines connected by packet switches. BBN’s role was to provide the hardware and software for these switches, called Interface Message Processors or IMPs. Kahn played a key role in system design for the proposal that ultimately won BBN the contract, and he subsequently joined the ARPANET development team led by Frank Heart.

In 1972, Kahn took the lead in organizing the first public demonstration of the ARPANET at the October International Computer Communication Conference in Washington, D.C. Prior to that demonstration the ARPANET had been an interesting but underused experimental system but, with Kahn’s encouragement, people at the various sites began to bring new applications online, making the network more attractive to users. This effort brought the ARPANET to maturity and dramatically introduced the network to the larger computer science world.

Vint Cerf was born 23 June 1943 in New Haven, CT. He suffered from a hearing impairment from an early age, and he later attributed some of his interest in computer networking to its promise as an alternative communications channel for the hearing impaired. Cerf received his B.S. in Mathematics from Stanford University in 1965, then worked for IBM for two years, where he contributed to Quicktran, a FORTRAN based time-sharing system. This whetted his interest in computer science, and he left IBM to study at the University of California, Los Angeles, where he earned his M.S. (1970) and Ph.D. (1972) in Computer Science.

As a graduate student at UCLA, Cerf became involved in the ARPANET through Leonard Kleinrock, an expert in queuing theory who had a contract to do performance analysis for the new network. As part of this role, UCLA was given one of the first four ARPANET nodes. Cerf became deeply involved in the ongoing discussion and development of the ARPANET host computer software (NCP) through the Network Working Group, whose informal, decentralized mode of operation would become the model for Internet protocol development and open software.

Joint work on the Internet

Cerf and Kahn first met when Kahn came to UCLA in 1969 to help test the nascent ARPANET. The two formed an effective working relationship to generate test data and predict and diagnose problems in the network.

In late 1972, Kahn joined the Information Processing Techniques Office (part of the US Defense Advanced Research Projects Agency – usually known as “IPTO”) as a program manager and initiated projects in network security, digital speech transmission, and packet radio. In 1973, building on a previous ARPA-funded project called Alohanet, Kahn initiated a ground-based packet-radio project, called PRNET, which started experimental operation in 1975. Kahn also began experimenting with using the Intelsat I satellite to link the Arpanet to sites in Britain and Norway (where ARPA conducted seismic monitoring to detect Soviet underground nuclear tests). In 1975 this effort grew into the Atlantic Packet Satellite Network (SATNET), an experimental transatlantic network operated in conjunction with the British Post Office and Norwegian Telecommunications Authority.

By 1973 Kahn was already thinking about connecting ARPA’s packet radio and satellite networks to the ARPANET, but he faced formidable challenges, since the three networks were technologically incompatible. ARPANET used point-to-point transmission, while the radio networks used broadcast; ARPANET tried to guarantee reliable transmission of packets, while PRNET did not; and SATNET had longer transmission delays because of the great distance the packets had to travel. Successfully connecting such diverse networks would require a new approach.

In the spring of 1973, Kahn approached Cerf with the idea of developing a system for interconnecting networks—what would eventually be called an “internet.” Kahn felt that his own knowledge of the problem of connecting dissimilar networks, combined with Cerf’s expertise in writing host software, would create a strong partnership. In addition, Kahn and Cerf demonstrated farsighted leadership by inviting networking experts from around the world to weigh in on the Internet design at a seminar in June 1973. This move not only led to more robust protocols, but also laid the groundwork for the global spread of the Internet.
Cerf and Kahn outlined the resulting Internet architecture in a seminal 1974 paper, A Protocol for Packet Network Intercommunication [2].

There were two key elements. First was a host protocol called the Transmission Control Protocol (TCP), which was intended to provide reliable, ordered, flow-controlled transmission of packets over the interlinked networks. Second was a set of gateways or routers that would sit between networks, passing traffic between them and handling inter-network addressing and routing. There was also a hierarchical address system, whereby packets were first sent by the gateways to a network address and then directed internally to a host address within that network. The Internet architecture was designed to make minimal demands on participating networks, to provide a seamless user experience, and to scale up gracefully, key features that would facilitate the Internet’s rapid expansion in the 1990s.

Cerf initially worked on developing the Internet protocols as an ARPA contractor at UCLA, then moved to IPTO as program manager for networking in 1976, staying at the agency until 1982. In 1978 he collaborated with Jon Postel and Danny Cohen, both at the University of Southern California Information Sciences Institute, to reformulate TCP as a set of two protocols: a host protocol (TCP) and a separate internetwork protocol (IP). IP would be a stripped-down protocol for passing packets within or between networks; it would run on both hosts and gateways, while the more complex TCP would run only on hosts and provide reliable end-to-end service. The new TCP/IP architecture, described in Cerf’s 1980 article “Protocols for Interconnected Packet Networks” [3], simplified the operation of internet gateways and helped increase the number and diversity of the networks connected to the Internet.

Cerf and Kahn oversaw the implementation of TCP and the experimental connection of ARPANET, PRNET and SATNET in 1977; this became the first incarnation of the Internet. Kahn became Director of IPTO in 1979, serving until 1985. He helped guide the changeover of ARPANET sites from the original NCP protocol to TCP/IP in 1983. Also in 1983, Kahn initiated ARPA’s Strategic Computing Initiative, a billion-dollar research program that included chip design, parallel computer architectures, and artificial intelligence.

In 1986 Kahn founded the Corporation for National Research Initiatives (CNRI), where he remains Chairman, CEO, and President. CNRI is a not-for-profit organization that provides technical leadership and funds research and development of emerging information infrastructure components, such as digital object identifiers and “knowbots,” mobile software agents that operate across networked environments.

Cerf left ARPA in 1982 to become Vice president of Digital Information Services at MCI, where he created MCI Mail. Cerf arranged for MCI Mail to become the first commercial email service to use the Internet in 1989. Cerf later returned to MCI as Senior Vice President from 1994-2005.

In 1986 Cerf joined Kahn as Vice President of CNRI. In 1991, recognizing the need for a neutral forum for Internet standards development, Cerf and Kahn founded the Internet Society (ISOC), an international nonprofit organization. ISOC provided an institutional home for the Internet Engineering Task Force, which sets technical standards for the Internet, and eventually expanded into policy and educational activities. Cerf served as President of ISOC from 1992 until 1995. He also served as chairman of the board of the Internet Corporation for Assigned Names and Numbers (ICANN), which coordinates the domain name system among other functions, from 2000-2007. In 2005 Cerf was hired by Google as Vice president and Chief Internet Evangelist.