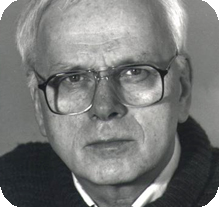 Nygaard got his master's degree in mathematics at the University of Oslo in 1956. His thesis on abstract probability theory was entitled "Theoretical Aspects of Monte Carlo Methods.

1948 to 1960, Norwegian Defense Research Establishment doing computing and programming (1948–1954) and operational research (1952–1960); 1957 to 1960, head of the operations research group in the Norwegian Defense Establishment; 1959–1964, cofounder and first chairman of the Norwegian Operational Research Society; 1960 on, Norwegian Computing Center (NCC), becoming its Director of Research in 1962; 1975–1976, visiting professor at the University of Aarhus, Denmark, remaining associated with that University until his death in 2002; 1977, professor at University of Oslo; 1987, visiting professor at Stanford University, visiting scientist at Xerox PARC in Palo Alto and a consultant and lecturer at Apple’s Advanced Technology Group.

1990, an honorary doctorate from Lund University; 1991, the first individual to be given an honorary doctorate by Aalborg University, Denmark; Member of the Norwegian Academy of Sciences; 1990, Computer Professionals for Social Responsibility Norbert Wiener Award for Social and Professional Responsibility; 1999, he became (together with Ole-Johan Dahl) the first to receive the Rosing Prize (awarded by the Norwegian Data Association for exceptional professional achievements); 2000, awarded an Honorary Fellowship for his originating of object technology concepts by the Object Management Group, of the International Organization for Standardization; 2001, he and Dahl awarded the Institute of Electrical and Electronic Engineers (for design and implementation of SIMULA 67); 2001, (together with Ole-Johan Dahl) the ACM A. M. Turing Award; 2000, made Commander of the Royal Norwegian Order of St. Olav by the King of Norway; 2004, AITO established an annual prize in the name of Ole-Johan Dahl and Kristen Nygaard to honor their pioneering work on object-orientation.
The University of Oslo and the University of Aarhus have both named a building after Kristen Nygaard.

With Ole-Johan Dahl, for ideas fundamental to the emergence of object oriented programming, through their design of the programming languages Simula I and Simula 67.

Kristen Nygaard is internationally acknowledged as the co-inventor with Ole-Johan Dahl of object-oriented programming and the programming language SIMULA. In addition he was a pioneer of participatory design and the "Scandinavian school of systems development".

Nygaard’s original field was operations research. Early in his career he realized that computer simulations would be a useful tool. He collaborated closely with Ole-Johan Dahl who, in Kristen’s words, “had an exceptional talent for programming”. This collaboration led to the first Simula language, SIMULA I, based on the language ALGOL-60. SIMULA I was originally considered a system description and simulation language, not a general programming language. Dahl & Nygaard quickly realized that its simulation concepts could be applied for programming in general. As a result of this insight they designed Simula 67, later just called SIMULA. It is a general purpose programming language and, like SIMULA I, it contains Algol-60 as a subset.

SIMULA contains the core of the concepts now available in mainstream object-oriented languages such as C++, Eiffel, Java, and C#:

One exception to the broad adoption of SIMULA concepts is the notion of an active object with its own action sequence, which, strangely enough, has not been adapted to other languages. For Dahl & Nygaard, having active objects was an essential facility to be able to simulate concurrent processes from the real world.

Before the concept of object-orientation became popular, SIMULA influenced the development of new abstract data types. As a result of these ideas, Simula was extended with constructs such as public, private and protected modifiers, originally proposed by Jakob Palme.

One unexpected result was that people often found making a model in Simula to be more useful than the actual simulation results. The process of describing the application provided a valuable insight in itself. This led Kristen to formulate one of his favorite aphorisms: To program is to understand. He thought programming should not be considered a low-level technical discipline designed just to accomplish a specific task, but that writing a program should enhance understanding of the problem domain and the solutions.

Nygaard’s next advance was the development, with Petter Håndlykken and Erik Holbæk-Hansen, of DELTA. It was not a programming language, but rather a system description language used to aid in modeling real world systems. It was intended for collaborative use by developers and users together—delta means participate in Norwegian. DELTA was based on SIMULA, but extended with equations for describing both discrete state changes and continuous changes over time.

When Kristen was a visiting professor in Aarhus, Denmark, he initiated work with Bent Bruun Kristensen, Ole Lehrmann Madsen and Birger Møller-Pedersen on the BETA programming language. BETA is a language for describing models of the real world, but, in the tradition of SIMULA, it was also to be useful as an implementation language. In the design of the BETA programming language, a criterion for adding any new construct to the language was that it be meaningful both for modeling and for programming.

In the late sixties, the Norwegian Iron and Metal Workers Union contacted Kristen for help with new computing technologies. Kristen and others developed courses and books about information technologies for the Union. The project developed the first “data agreement” between a union and a company, and elements from this were later included in Norwegian legislation.

Kristen was also one of the few philosophers of informatics, stemming from his early work on simulation. To be able to create a model of real-world phenomena, it is necessary to have a strong conceptual framework to understand and organize knowledge.  Modeling capabilities were always central to his design of languages. One famous example of this is the subclass mechanism, developed to represent domain concept specialization hierarchies.

Kristen was thrilled by the enormous success of the object-oriented approach to programming. During a visit to Xerox PARC, Alan Kay demonstrated the Smalltalk system, and Kirsten was very impressed to see how the ideas from SIMULA had inspired the Smalltalk-team. He was happy to see these ideas further adapted by languages such as Flavours, Loops, C++, Eiffel, Java, C# and many others. He never participated in the critique of possible shortcomings of other languages; on the contrary, he respected their creators and acknowledged their influence on the development of object-orientation.

Hundreds of books were written on object-orientation, but Kristen found that most of these books did not do a good job in teaching the fundamental concepts. He was very concerned with education, but frustrated by what he considered a lack of quality. The goal of his last project (COOL: Comprehensive Object-Oriented Learning) was to develop first-class teaching material on object-oriented programming. He had just set up an international team of participants and was ready to start the work when he died in 2002.

But Kristen was not just a pioneer and researcher in informatics. He was an engaged social and political citizen, involved in several aspects of society, including politics. During the intense political fight before the 1972 Referendum on whether Norway should become member of the European Common Market, he worked as coordinator for the large majority of youth organizations that worked against membership. He also was the leader (1990-1995) of Norway's No to the EU movement, which argued against Norwegian membership of the European Union and led to victory in the 1994 referendum.

Further information on Kirsten Nygaard can be obtained from the following: