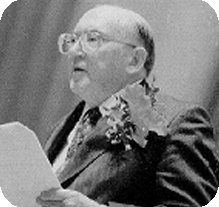 Professor Wilkes is best known as the builder and designer of the EDSAC, the first computer with an internally stored program. Built in 1949, the EDSAC used a mercury delay line memory. He is also known as the author, with Wheeler and Gill, of a volume on "Preparation of Programs for Electronic Digital Computers" in 1951, in which program libraries were effectively introduced.

Maurice Vincent Wilkes was born 26 June1913 in Dudley, in the county of Staffordshire in the English Midlands. His father was a financial officer for the estate of the Earl of Dudley which had extensive mining interests. His mother was a housewife. He was educated at King Edward VI Grammar School, Stourbridge. In his teens he built crystal sets, read Wireless World, and eventually gained a radio amateurs license -- a background which proved useful when it came to building electronic computers two decades later. He entered St Johns College, Cambridge University, in 1931, where he read mathematics.

In October 1935 he became a research student at the Cavendish Laboratory, Cambridge University, working on the propagation of long radio waves. The following spring, he attended a lecture by Douglas Hartree, a computing expert and professor of mathematical physics at Manchester University. Hartree described the “differential analyzer” invented by Vannevar Bush at MIT. This was an analog computing machine for the integration of differential equations. Hartree had built a model differential analyzer from Meccano (a British constructor toy similar to the American Erector Set), which proved surprisingly useful. A copy of this machine was built at Cambridge under the direction of John Lennard-Jones, professor of theoretical chemistry, and Wilkes became an enthusiastic user. In early 1937, the University set up a Computing Laboratory under the direction of Lennard-Jones, and Wilkes was appointed assistant director from October 1937.

On the outbreak of war, the Computing Laboratory was taken over by the military. Wilkes joined the scientific war effort and worked on radar and operations research. This gave him an ideal background, and a network of contacts, for building computers after the war.

In October 1945, Wilkes returned to Cambridge to take full charge of what was now called the Mathematical Laboratory. In May 1946, he was visited by L. J. Comrie, a pioneer in mechanical computation, who brought with him a copy of the First Draft of a Report on the EDVAC written by John von Neumann, summarizing the deliberations of the computer group at the Moore School of Electrical Engineering, University of Pennsylvania. The Moore School had just completed the ENIAC, the world's first electronic computer for defense calculations, and the EDVAC was the design for a follow up machine. Wilkes had never seen the report before and stayed up late into the night reading it. He recognized it at once as “the real thing” and decided that the laboratory had to have one.

Later in 1946, Wilkes was invited to attend a summer school in computer design organized by the Moore School. Because of difficulties getting a transatlantic passage, he did not arrive on the course until mid-August, by which time he had missed more than half. Rarely short on confidence, Wilkes decided he had not missed much of consequence. Sailing home on the Queen Mary he began the design of a machine he called the Electronic Delay Storage Automatic Calculator -- EDSAC for short, an acronym consciously chosen as a tribute to the EDVAC.

Work started on building the EDSAC in early 1947. Almost everything had to be done from first principles—memory technology, electronic arithmetic and logic, and control circuits. Cambridge University was at the center of UK computing at this time, in part because of the fortnightly colloquia Wilkes established, which were attended by members of almost every computer project in the country.

The EDSAC sprang into life on 6 May 1949, the world's first practical electronic computer. Manchester University had got there first in June 1948 with an experimental machine, but the EDSAC was the first capable of running realistic programs. By the beginning of 1950 the Laboratory was offering a regular computing service.

Wilkes decided that the Laboratory would specialize in programming rather than building computers. He was perhaps the first person to recognize that what we now call software (a term not used until about 1960) would prove to be a worthwhile academic pursuit. He assigned the design of the EDSAC programming system to a research student David Wheeler (later a professor of computer science at Cambridge). The system that Wheeler created was a tour de force that was admired worldwide. In 1951 Wilkes got the techniques published as the first textbook on programming The Preparation of Programs for an Electronic Digital Computer, although the book was usually known for its three authors as “Wilkes, Wheeler and Gill” or WWG for short [1]. The third author, Stanley Gill, was another young researcher who later became a major figure in British computing until his untimely death in 1975.

EDSAC was soon loaded to capacity, and plans were laid for a successor, EDSAC 2. Wilkes came up with a new design principle -- which he called microprogramming—that greatly simplified the logical design of the new computer. Microprogramming was Wilkes’ most important scientific contribution to computing, and had he done nothing else he would be famous for that [2]. In the early 1960s IBM based its world beating System/360 computers around the idea, and it remains a cornerstone of computer architecture.

Wilkes was appointed Professor of Computer Technology at Cambridge in 1965. He remained director of the Computer Laboratory (the name was changed from the Mathematical Laboratory in 1970) until he reached the statutory retirement age of 67 in 1980. His tenure had seen computers evolve from scientific instruments to information processing machines that were the basis of a worldwide industry. The Laboratory kept up with changing trends, primarily in computer engineering, developing time-sharing systems in the 1960s and computer networking in the 1970s. Wilkes was very good at keeping up with technology trends, and preventing either himself or the Laboratory getting locked into dying research fashions.

Cambridge’s prominence and Wilkes' confident manner led to a constant stream of invitations to give lectures and to participate on international committees. He played an influential role in promoting computing in Britain, being elected to the Royal Society in 1956, becoming inaugural president of the British Computer Society in 1957, and serving as the British representative for the International Federation of Information Processing Societies.

Wilkes received many awards and academic honors. In addition to the ACM Turing Award in 1967, he received the Harry H. Goode Memorial Award of the IEEE in 1968, the McDowell Award of the IEEE Computer Society in 1981, and the Faraday Medal of the Institution of Electrical Engineers also in 1981. In 1992 he was the first recipient of the Kyoto Prize. He received honorary doctorates from several universities, including his alma mater Cambridge University. He was knighted in 2000.

Following his retirement from Cambridge University in 1980, he took up a position as a consulting engineer with the Digital Equipment Corporation in Maynard, Massachusetts. In 1986 he returned to Cambridge, where he became a board member of Olivetti-AT&T Research Laboratories. As an emeritus professor, he maintained a close association with the Computer Laboratory until the last months of this life. Wilkes was deeply interested in the history of his subject. He made a study of Charles Babbage, and wrote a number of important articles on the computer pioneer and his milieu [4].

Wilkes died in Cambridge, 29 November 2010. He married Nina Tyman in 1948, who predeceased him. They had one son and two daughters.