ACM encourages its members to take a direct hand in shaping the future of the association. This philosophy permeates every level of ACM, reaching to the top echelons of leadership where members fill vital positions on the councils, boards and committees that govern the organization and raise the visibility of ACM worldwide.

The association’s highest governing authority, the ACM Council, comprises 16 ACM members. Five of these members form the Executive Committee, which includes ACM’s President, Vice President, Secretary/Treasurer, immediate Past President, and the Special Interest Group Governing Board (SGB) Chair. The President, Vice President, and Secretary/Treasurer are elected office and each has a term of two years. The remaining spots on the Council include three SGB representatives, the Publications Board Chair, and seven at‐large members, each of whom serves a four‐year term.

Establishment of the ACM Council put in place a leadership structure to govern the association’s internal activities. ACM has also worked tirelessly to establish its position as a leader in the greater computer science community through the creation of geographically distributed councils in India, Europe, and China. These councils strive to increase awareness of ACM and its wide range of regional activities, from high‐quality conferences to logistical support to help increase the number of professional and student chapters worldwide.

ACM has also led the way in supporting computing professionals through the creation of four boards which work together to manage ACM’s products and services. Composed of numerous volunteer committees and subgroups, these boards aim to maximize the benefit of ACM’s offerings for students, educators, and the vast number of researchers and practitioners at work around the globe.

Drawing on its six decades of experience, ACM has moved to the forefront in helping to shape public policy worldwide. In this country, the ACM U.S. Public Policy Council assists policymakers and the public in understanding information technology issues and advancing a policy framework that supports innovation in computing and related disciplines. Additionally, ACM’s councils in India, Europe, and China work toward these same goals, fostering informed policy decisions that will benefit researchers and practitioners as well as the society at large.

Working in tandem with these regional councils, The ACM Women's Council (ACM‐W) takes an active role in advocating internationally for the full engagement of women in all aspects of computing. With chapters in each of these geographical areas, ACM‐W promotes the formation of new chapters, publicizes the ACM‐W scholarship program, and develops additional local activities.

As a recognized and respected leader in the field of computing, ACM seeks to put its stamp on those areas that most affect its members, from education to publications to public policy to diversity. To accomplish the goals of this ambitious agenda, we need to enlist your help. We need you to step up and volunteer for positions on the many committees, boards, and councils discussed above.

Learn more about how you can get involved.

Get Involved with ACM

ACM is a volunteer-led and member-driven organization. Everything ACM accomplishes is through the efforts of people like you. A wide range of activities keep ACM moving, including organizing conferences, editing journals, reviewing papers and participating on boards and committees, to name just a few. Find out all the ways that you can volunteer with ACM. 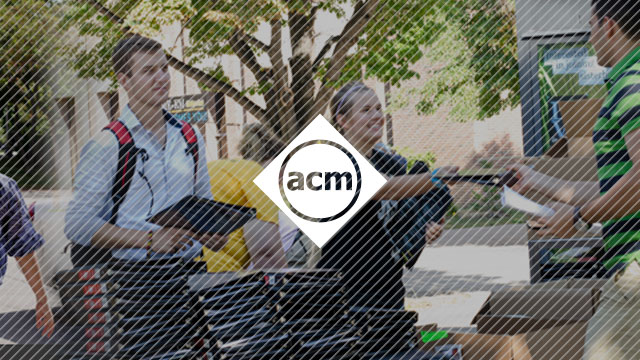 Guiding Members with a Framework of Ethical Conduct

Learn more about ACM’s commitment to ethical standards: the ACM Code of Ethics, Software Engineering Code of Ethics and Professional Practice, and Committee on Professional Ethics (COPE), which is guiding these and other intiatives.